The Thesprotia Expedition is an interdisciplinary project that combines archaeology, geology, and history with the aim of writing the diachronic history of one part of Thesprotia in Epirus, northwestern Greece – specifically the Kokytos river basin – from prehistoric down to modern times. The project, which is directed by Dr. Björn Forsén under the auspices of the Finnish Institute at Athens, was originally in 2003 scheduled to last for five years. With additional funding from the Academy of Finland field work has continued until 2010. 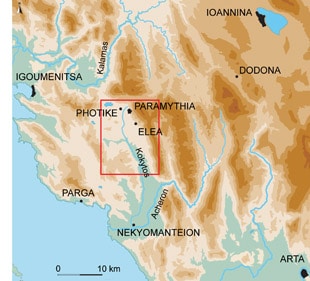 The Thesprotia Expedition puts special emphasis on studying ethnic and cultural differences, settlement patterns and demographic trajectories, economic and social developments, as well as environmental changes. In order to shed light on these aspects we make use of a large palette of different disciplines and methods, including scholars from Finland, Sweden, Russia, the United States, the Netherlands and Greece. We also invite other scholars who work in the region to contribute to our publications. The work of the project itself includes a restudy of ancient inscriptions from the region, research in archives in Istanbul, Venice and Corfu, an intensive archaeological survey with trial excavations in areas of special interest, a geo-archaeological survey, and palynological sampling, geophysical prospecting as well as topographical mapping.

Far less archaeological, geological and historical research has been devoted to Epirus than to the rest of Greece. This makes e.g. the present project the first intensive field survey to take place in Thesprotia and only the second survey in all of Epirus. The ultimate aim of the Thesprotia Expedition is to create a deeper understanding of the past in this part of Greece by building up a set of data that can be compared with similar information from other regions. Only by such comparisons can we establish the regional differences in development that help us to understand the economic, social and political history of the Eastern Mediterranean.