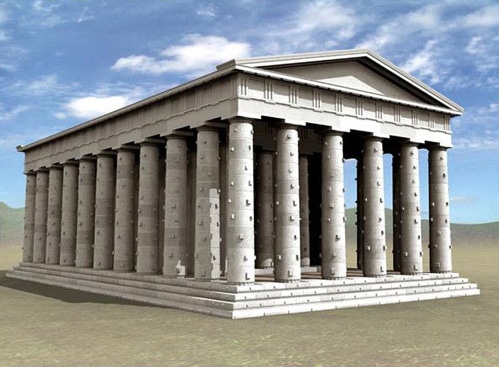 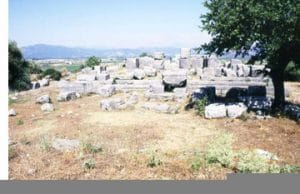 Ancient Greek design and building practices underwent a gradual shift during the Classical and Hellenistic periods, from the fifth to the second century BC. Most architectural scholars agree that simple arithmetical proportions are a key to understanding Classical and Hellenistic architectural design, but there is far less consensus on whether the Doric design system can be regarded as being based on a fixed-size module, and what was the range of foot-units used in the Hellenic world. In order to better understand the principles of building design and the relationship between tradition and innovation in Late Classical and Early Hellenistic architecture, it was necessary to carry out new detailed investigations of individual buildings. The target of this research was the unfinished Doric temple of Zeus at Stratos in Western Greece, built at the very end of the fourth century.

Permission to carry out the work in 2000 and 2001 was granted by the Hellenic Ministry of Culture, and the fieldwork at Stratos was greatly facilitated by the friendly co-operation of the Sixth Ephorate of Prehistoric and Classical Antiquities at Patras. The research was funded by the Emil Aaltonen Foundation, the Finnish Institute at Athens and Royal Holloway, University of London. 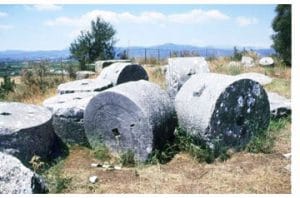 The research group, led by Jari Pakkanen, carried out two seasons of fieldwork in the sanctuary, in 2000 and 2001. The primary aim of the initial phase of the project was to clarify problems related to the reconstruction of the temple of Zeus by carrying out building measurements at the site, thus making a more in-depth study of the building in its wider context possible. Previous studies at the site have resulted in the reconstruction of the building with unusually squat columns for an Early Hellenistic building: based on comparative material from other sites it is known that the finances for an entire project were often not secured at the beginning of that project, so could it be that funds ran out and a design change relating to the height of the structure took place during the construction of the temple? The economic and political reasons behind the interruptions of ancient building projects are in most cases unknown, and for regions such as Acarnania there are few literary sources which could clarify the situation. The temple building at Stratos was part of a large urban development project of the city-state, and all discussions of the economy of the area must start with an investigation of the material remains. 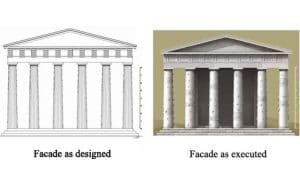 Based on the new fieldwork at the sanctuary of Zeus at Stratos, the height of the temple peristyle column can be established as 7.9 m. The proportional column height of 6.1 times the lower diameter is very conservative considering the date of the building. The great diameter difference between the partially carved top drum and the finished capital suggests that the temple was originally designed with one more drum per column. The change in plan can plausibly be connected with the economic strain the large-scale urban development caused to polis finances at the end of the fourth century BC. The planned height can be estimated as 8.7 m, which is 6.7 times the lower diameter.

In general, one approach through which research of Greek architecture can retain its viability as a discipline is by adopting new methodologies. The unfinished nature of the monument at Stratos provides an enticing testing ground for the combination of traditional archaeological fieldwork with novel methods of reconstructing the physical appearance of the building and studying fourth-century architectural design. The porch columns of the temple are worked one stage further than the exterior colonnade, and this varying degree of finishing provides an unusual opportunity for determining how the work on the column shafts was technically carried out. 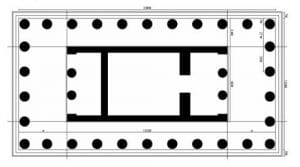 Any study which attempts to elucidate the proportional relationships and metrological units used in Greek architecture must begin with a statistical analysis of the building dimensions: this is the only way to ensure that all relevant possibilities are taken into account. Cosine quantogram analysis of the Stratos data shows that the length of the unit used in the design of building elements is 0.105 m. The layout of the temple follows almost in its entirety a strictly modular pattern; the only exception is the lengthwise placement of the cella according to the sides of the flank columns. The size of the design unit suggests that a foot-standard of 0.316 m was employed in the temple construction, but its relationship to the local unit at Stratos remains unresolved. 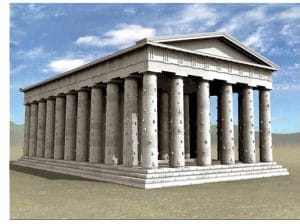 The photorealistic digital model incorporates the results of the new fieldwork: the biggest difference between the new and previous reconstructions is the variation in the height of column drums and the irregular placement of the bosses. The model was made by Dr Chrysanthos Kanellopoulos and his team Sixton using AutoCAD; the surface textures were rendered in 3D Studio Max by Anaparastasis. From the detailed study of the drums, it was evident that the bosses could not have been aligned on the axes of the columns as they are in the previous reconstruction: some drums have only three bosses, and no consistent pattern was discovered between the position and orientation of the drum dowels, the empolia and the bosses. Since the bosses would have been removed when the fluting was cut, there was obviously no need to systematically plan their positions.

For a preliminary report of the fieldwork and its results, see J. Pakkanen, ‘The Temple of Zeus at Stratos: New Observations on the Building Design’, Arctos 38 (2004) 95 – 121.

The Papers and Monographs of the Finnish Institute at Athens volume XVIII.